Where is the recognition of MXene, numbers speak!

Introduction to MAX Phase and MXenes

The general formula of the composition of the MAX phase is Mn + 1AXn, where M is a transition metal element, as shown in the light green part of FIG. 1, A is mainly the element of the third or fourth main group, as shown in the red part of FIG. 1, X is carbon and nitrogen Or a combination of the two, n can take the values of 1, 2, 3, 4 and are called MAX phases of type 211, type 312, type 413, type 514, respectively. Under the premise of stoichiometric ratio, the M elements can be combined with each other, namely Bimetal or multimetal, Ti2AlC and (V0.5Cr0.5) 2AlC are 211 type, Ti3AlC2 and Ti3SiC2 are 312 type, Ti4SiC3 and Ti4AlN3 are 413 type. When n = 1, the type 211 is composed of one regular octahedron, when n = 2, the type 312 is composed of two regular octahedrons, when n = 3, the type 413 is composed of three regular octahedrons As shown in Figure 2, it is a schematic diagram of the structure of several MAX phases and corresponding MXenes.

Figure 1 The three elements in MAX that have been reported, light green is M, red is A, and blue is X. 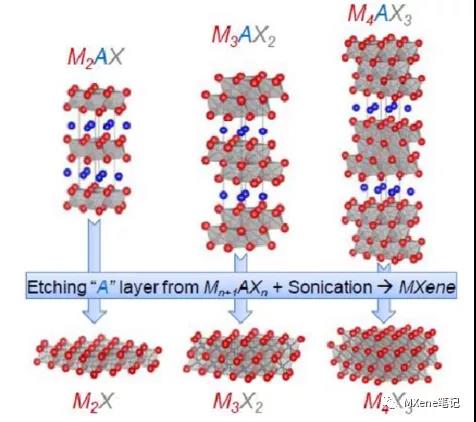 Recently, some literature refreshed the conductivity of MXene, reaching 15100S / cm, which is an order of magnitude higher than graphite, but inferior to graphene.

˘ÚGood hydrophilicity (carbon nanotubes and graphene have a stable carbon surface, the hydrophilic property is very limited), this advantage provides convenience for the composite of MXenes and other materials. [2]

˘ŰMXenes has good mechanical properties (better tensile strength and flexibility), and it is easy to form a film and directly used as an electrode. When used as a battery pole piece, it avoids the addition of binders and conductive agents. [3]

˘Ů The peeled MXenes flakes are easy to stack and reunite, which makes the Mxene flakes dense and it is difficult to prepare simple MXenes powder with few layers. After the MXenes sheet is agglomerated and densified, it makes it difficult for the electrolyte to infiltrate, and it cannot exert its electrochemical performance. In view of this shortcoming, the target application of MXenes (MXenes has good hydrophilicity) is often started when a small amount of MXenes aqueous solution is obtained. [7]

˘ÚWhen MXenes alone is used as the electrode negative electrode material, the first Coulomb efficiency is low (58%), and the specific capacity is low (used as a lithium battery negative electrode, the theoretical capacity is 320mAh / g, which is lower than graphiteˇ®s 372 mAh / g). The platform is widely used as a capacitor material for research, usually doping and recombination are needed to improve. [8]

˘ŮUse the layered structure to play the role of conductive skeleton

˘Ú Rich surface chemistry (that is, the surface of the obtained MXenes contains functional groups, which makes MXenes have the characteristics of hydrophilicity, surface electronegativity, etc.).

Although the conductivity is good, the conductivity is no better than graphene, and even some MXenes are semi-conducting. Although the specific surface area is large, it is tens to hundreds of square meters per gram, which is no better than MOF materials (thousands of square meters per gram). Good electrical conductivity and large specific surface area are characteristics of MXenes, but they are not unique to MXenes.